Keto Diet | What is it? What’re the benefits? & Is Keto Right for You?

Is Keto For You?

One of the number one complaints we hear about those trying to manage low-fat or calorie restricted diets are how hungry they feel all day. And anyone who’s seen a Snickers commercial knows the kind of mood that puts you in. Well, we may have some good news for anyone looking for an alternative to traditional dieting like Keto Diet!

Weight-Loss Is Not the Only Benefit

In the past several years we’ve seen  the  emergence  of a highly effective, energy producing, high-fat, low-carb diet offers quite a few benefits including the ones above. The fact that people are seeking out high fat groceries and losing weight has led to many experts scratching their heads; and these twenty three studies depict very different results than you may be expecting (Study 1).

The research is out, and the benefits go as far as decreasing your odds of developing cancer, diabetes, and even Alzheimer’s disease: (Study 2 , 3, 4, 5)

Let’s delve into what exactly the diet is anyway!

Similar to the Atkins diet and many other low-carb diets the Keto Diet involves a heavy intake in protein and fats while consuming minimal carbs which leads many to looking to pre-designed Keto Packages such as Keto Boxes. Deals like these can be a great deal, especially when they provide new Keto-Approved Snacks delivered right to your door every month for only $39.99!

By essentially replacing your normal intake of energy producing carbohydrates to fuel your body with fat, your body transitions into a metabolic state known as ketosis.

When your intake of carbs drops to under 50 or under 20 carbs (There’ a debate on which is the best approach but more on that later), and Ketosis is taking place; your body is forced to find energy elsewhere. Thankfully, your body’s second choice just happens to be fat. Not only does it burn fat for energy but it turns fat deposits into ketones within the liver. This is said to provide energy for brain functions (Study 6 & 7).

Many studies have concluded the effects resulting from a ketogenic diet often lead to heavy reductions in insulin/blood sugar levels providing a number of health benefits other than significant weight loss (Studies 6, 8, 9, 10, 11).

To Summarize: The term ‘Keto Diet’ derives from a metabolic process known as Ketosis as the body metabolizes protein & fats instead of carbs via lowering blood sugar and insulin levels.

In the standard version the Keto Diet, you’ll take in around 150 G’s of fat per day, or about 3 X what the average American consumes on a daily basis. This is done to ensure your metabolism switches from burning carbs to burning fat for energy. Planning around this dietary change offers several options but is commonly done via planning for all meals/snacks around fatty foods such as olives & olive oil, fatty fish & meats, avocados, butter and Ghee. Now, you’ll need to limit your carb intake to no more than 50 grams per day (or around the amount contained in your morning raspberry muffin).

Most manage to do this by relying on non-starchy vegetables, low-carb/sugar fruits such as melon or various berries, plus leafy greens to substitute for their snacking needs. Lastly, you’ll want to make sure you’re consuming an adequate amount of protein. Most choosing the SKD rout get around 90 gs of protein each day spacing out about 30 gs with each meal (about four ounces of fish, chicken or red meat).

Many people  with active life styles and athletes alike choose an alternative path coined Targeted Keto Diet (TKD), which normally allows for 20 to 30 more carbs per day. While it is debatable whether these individuals are still able to get into ketosis; the idea behind it is for those with active life styles to consume these additional carbs before or after workout to mitigate high-intensity workouts to enhance recovery.

Meaning those choosing this version of the diet are totaling their carb intake from 50-80 carbs a day depending on what your initial limit was. A common strategy is to use sports supplements, grain-based foods, or dairy products to do this since these are usually burned off quickly and won’t end up stored as fat.

Many choose to cycle through their Keto experience by balancing with days ‘on’ and ‘off.’ One of the more common approaches is where somebody would have 5 days ‘on’ with 2 ‘off’ days each week. Many keep their off days for special occasions such as birthdays, events, holidays or going on a trip somewhere.

However, you’ll want to combine this approach with utilizing wholesome high-carb foods in your “off” days. This includes many of the suggestions above such as whole grains, high-starch vegetables, dairy, and low-sugar fruits!

This is a favorite for our meat eaters out there! The High-Protein Keto Diet consists of about 130 gs of fat and anywhere from 100-120 grams of protein each day (about 4 four-ounce servings of fish, chicken or red meat). It’s still recommended to keep your carb intake at or below  20-50 grams of carb per day; but a lot of people find this approach a lil more simple since it requires less fat and allows for higher amounts of protein than the SKD.
Macronutrients | Carbs: 5-10% Protein: 30% Fat: 60-65%
However, there are some experts who claim this strategy may not have the benefit of actually entering into Ketosis since protein is sometimes converted into Glucose for energy. Either way, those who choose HPKD will typically still experience weight loss.
To Summarize: While there are four general approaches to the diet, the SKD (Standard Keto-Diet) has been studied the most and is normally the one recommended.

Possible Benefits of Going on A Keto Diet

To Summarize: The Keto Diet is claimed by many health professionals as not only a much more effective way to manage weight than calorie restricted or low-fat diets, but also comes with many additional benefits as well.

Acne: Studies have shown that by keeping insulin level low & decreasing your sugar intake may help  with acne problems (Studies 41).

Brain Injuries: On a study done on  animals; it was found the Keto Diet helps with brain injury recovery and even help decrease chances for concussions (Studies 40).

Epilepsy: Studies have found the diet can greatly impact the conditions known to trouble those with epilepsy such as seizures (Studies 4).

Alzheimer’s Disease: The  diet has been found to both moderate the symptoms of and slow the progression of Alzheimer’s disease (Studies 5, 37, 35).

Cancer: We’re even see many treatment programs for various types of cancer and actively push their patients into using the diet as a mechanism to slow the growth of tumors as well (Studies 3, 38,).

How Many Carbs Can I Eat and Stay in Ketosis?!?

Unfortunately, there is no exact limit for how many carbs to consume a day to remain in Ketosis. No evil doctor who’ll flip the switch to banish you to a ketoisisless existence for eating a roll of sushi. But depending on how many carbs you eat during an “on” or “off” day could prolong the amount of time it’ll take to get back into Ketosis.

How Long Does it Take to Get Into Ketosis

The time it takes to get into Ketosis varies from person to person, but if you’re able to stay true to your Keto-Diet then the average person can expect to enter into ketosis in 1-10 days.

It can be difficult to say exactly how long it’ll take for your body to get into (or back into) Ketosis. But there are a few reliable ways to measure your ketone levels and many factors to consider. This includes your overall nutrition, whether you have a fast metabolism, or other cheat codes such as fasting or supplements.

Experiences vary greatly however. For instance,  if you’ve been in ketosis for a long period of time and have one ‘off’ day, chances are you’re going to be able to back into Ketosis  in as little as 24 hours. But lets say you’ve never (at least purposefully) gotten into Ketosis and you’re trying to shock your body into this process it could result in tipping on the other end of the scale.

Many who have an ‘off’ day experience hangover like symptoms the following day. I know when I have a hiccup I’m usually gonna be all groggy and tired for the entire next day. Kinda makes you realize the true effect carbs have on your body.

Why People Differ for Time Needed To Enter Ketosis

This is because everybody has a different rate at which their body metabolized food. Other Factors include previous diets as that determines the way we metabolize glucose or Insulin Resistance. There are of course supplements that help enter into ketosis quicker or even intermittent fasting which can help speed up the process.

Any and all food showing  a high number of carbs should be avoided unless there is an equal or comparable amount of carbs. This results in a low amount of net carbs.

Many foods you may have thought were healthy may not fit into a diet which requires limiting carbs. This even includes vegetables such as potatoes and even limits many fruits

Many experts claim there are various types of carbs in which your body does not process in the same manner. ‘Net Carbs’ refers to the amount of carbs your body actually absorbs.

Although sugar and fiber are included in the grams of carbs listed in the nutrition label, they are not processed by your body in the same way.

Also sometimes referred to as ‘impact carbs’, these are the carbs which are absorbed by your body and converted into glucose. These include both Complex and Simple Carbs.

Simple Carbs have 1-2 units of sugar linked together usually found in fruits, many vegetables, honey, sugar, maple syrup, and milk

The reason complex carbs are, well complex; is because they contain more a couple sugar units which are linked together and often high in starches like potatoes.

What happens as the food is digested through your small intestine is that the foods are separated into single units of sugar by the enzymes which are produced there. This is done because your digestive system can only absorb individual units of sugar.

But there’s a caveat. There are types of carbs which aren’t able to be separated into the individual sugar units that are able to be absorbed by your body including fiber and sugar alcohols. 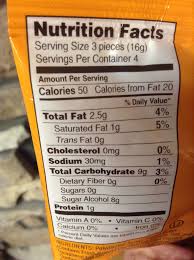 PrevPrevious10 Pieces of Equipment You Need in Your Home Gym
NextIntermittent Fasting – Too Fast or Not Fast Enough… Is That Your Question?Next